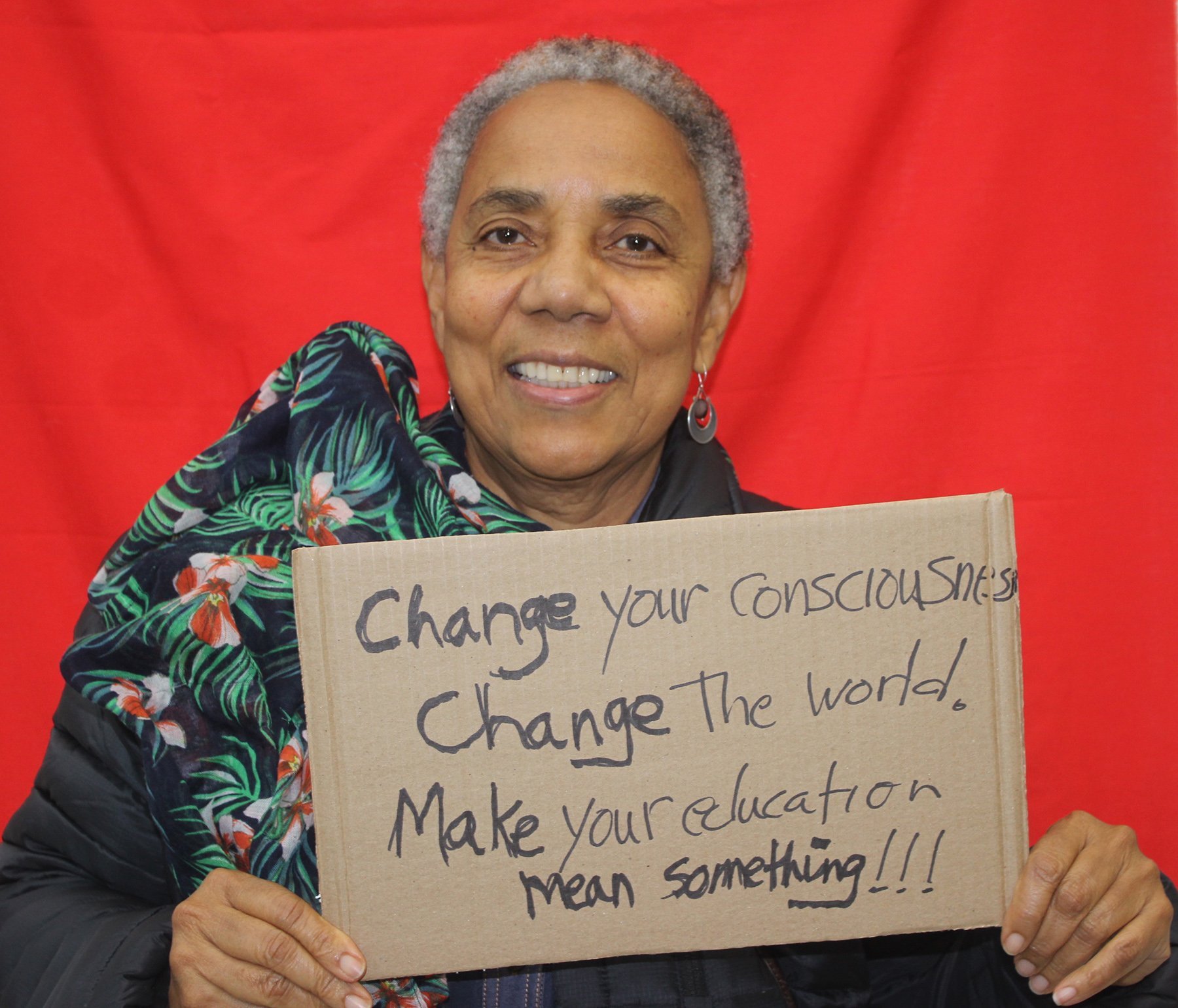 Some things only get better with age, and dub poet
Lillian Allen continues to define the form and explore its leading innovative edge. She has performed her work in many major venues in North America taking poetry to larger and larger audiences. She has produced Juno award winning recordings, critical acclaimed publications, and she has performed her work for television, film, radio, and print media across the world. Lillian is also a professor of creative writing at the Ontario College of Art and Design University, inspiring students to claim space for their dreams in the world and to use their creativity to make revolution.
– Banff Centre for the Arts

Lillian Allen’s first album of poetry with music, Revolutionary Tea Party, was proclaimed a Landmark Album by Ms. Magazine in 1991. She won a Juno award for that album and for Conditions Critical. Freedom & Dance, her third album; her 2012 release ANXIETY; and her recording for children and young people Nothing But a Hero received critical acclaim. Her latest single Woken & Unbroken (2018) is available free to stream from CDBaby.

Allen has published several ground-breaking books of poetry –  her latest collection Make the World New: The Poetry of Lillian Allen, edited by Ronald Cummings (published in Spring 2021, part of the Laurier Poetry Series), her first trailblazing book of poetry Rhythm An’ Hardtimes (a Canadian best seller), Psychic Unrest, and Women Do This Everyday. Her work for young people includes three books: Why Me, If You See Truth, and Nothing But a Hero.

As a playwright she has produced One Bedroom With Dignity, Love & Other Strange Things and the radio play Marketplace. Allen is also co-producer and co-director of Blak Wi Blak, a film documentary on Jamaican dub poet Mutabaruka, and has been featured in three short films/videos.

Lillian Allen is internationally recognized as a godmother of dub lyricism, rap, and spoken word poetry. A pioneering exponent of the highly politicized form of dub poetry created in Jamaica by Oku, popularized in Britain by Linton Kewsi Johnson and Benjamin Zephaniah. Allen embedded feminist voice in the literary dub art form. Founder of the visionary Toronto International Dub Poetry Festival and a variety of cultural organizations such as youth empowering Fresh Arts, Allen has spent over three decades writing, publishing, and performing her work to appreciative audiences around the globe.

Share This
We use cookies to ensure that we give you the best experience on our website. If you continue to use this site we will assume that you are happy with it.AcceptPrivacy policy